These adorable snowman macarons are filled with my classic vanilla buttercream and are decorated with royal icing and edible luster dust. They are so cute, delicious and perfect for the holiday season!

This post contains affiliate links. As an Amazon Associate I earn from qualifying purchases.

How To Make Snowman Macarons

How Do You Make Macaron Shapes?

Macaron shapes can be a bit tricky to pipe. The first thing you should do is use a template as a guide so all of your shells are the same size. You don’t want the batter to run into each other, so you need to let one shape start drying before piping any other shape right next to it.

I created a snowman PDF template which you can download below. This is the easiest way to make macaron shapes. I’ve tried piping shapes without templates in the past and it has not worked out at all because the macaron shells would always end up different sizes.

Food coloring markers are amazing and one of my best recommendations when you’re decorating macarons or any other cookies. They are markers that have edible ink which you can use to write on food and you use them exactly like you would use any other marker.

How Do You Use Food Coloring Markers?

I especially like to use these food coloring markers whenever I’m making my character macarons because it helps to visualize where the eyes and mouths will be. It’s so helpful to see where the royal icing should go before adding it.

Can I Use Royal Icing to Decorate Macarons?

Yes! Royal icing is one of my favorite ways to decorate macaron shells. The icing is so quick and easy to prepare, especially if you use my small batch royal icing recipe made with meringue powder. I’ve included the recipe below in the recipe card.

How Do You Make Royal Icing Shimmer?

Can You Mix Luster Dust In Royal Icing?

That is why you need to paint the royal icing with the luster dust after it has already dried.

The best way to store macarons is in an airtight container in the refrigerator or you can store them in the freezer for about two months.

Can You Freeze Macarons?

Freezing macarons is a great idea if you’re making a large amount because you can make them in batches and freeze them, and have them ready whenever you need them. 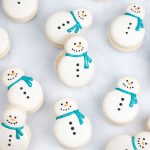 All ovens are different so temperature and baking times should only be used as a guide Mixing bowl should be clean and grease free Weigh all ingredients in grams for accuracy Use room temperature egg whites (to bring eggs to room temperature quickly, put them in a bowl filled with hot water for about 5 minutes) Sift the almond flour and powdered sugar together because almond flour is moist and doesn’t sift well alone Mix the egg white powder and the granulated sugar before adding to the egg whites to fully dissolve the egg white powder Whisk the meringue until you have stiff peaks Let macarons dry before baking so they don’t crack *Calories reflected are for macaron shells only

Welcome to The Tipsy Macaron, where we talk about all things macarons! Here you’ll find recipes, macaron art, and tips and tricks for making these delicious and beautiful little treats.

Thanks for stopping by!